Arts Centers Blossoming in the Valley 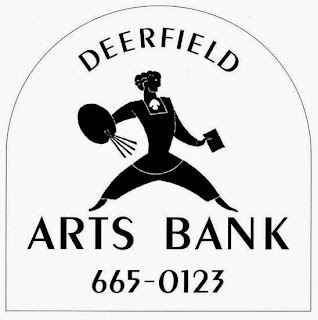 It had been my hope, while I was Chair of the Amherst Public Arts Commission to re-utilize a decommission school (East St. School) to make the Amherst Arts Center. While gathering a group of knowledgeable and influential people to help me plan this arts center, it became apparent (to me) that in order to make this happen, I would have to give up my own artwork,  as well as significant personal & family time and devoted myself completely to this endeavor which would have involved constant fundraising. After a lot of soul searching, I realized that at this stage of my life that it was more than I cared to sacrifice. So I was so pleased to hear that a new arts center is being created in a former bank building in South Deerfield, by an entrepreneurial spirit, Fiber Artist, Jane Trigere. She has three goals for the Deerfield Arts Bank - have fun, build community and pay the bills. She has asked me to "mentor" her and help organize some exhibits. The first exhibit will highlight artists from Deerfield during the month of April. Later this Spring a call for art from artists in the Pioneer Valley will be posted. If you would like to be consider for either of these exhibits send 3 low res jpegs to terryrooneyart@gmail.com directly or links to your websites for consideration of our exhibition committee.

This Arts Center is still evolving, there will be art classes, art supply store, performances and many wonderful events to enrich the cultural life of the Pioneer Valley.
http://www.recorder.com/home/9111560-95/deerfield-arts-bank-to-open-in-former-bank-of-america

Also more good news on the Arts Center front is that the Northampton Center for the Arts has found a new home at 33 Hawley St, Northampton. http://nohoarts.org/

Posted by Amherst Biennial at 7:23 AM No comments:

This Summer I lost my dear friend, Joe DeStefano, who I've known since the days of my youth in Brooklyn, NY. He was a calming, creative force in my life, a young man who introduced me to Paul Winter's Winter Solstice performance at St. John of Divine and other delights such as the Lord of the Rings trilogy .On a special occasion, I  traded a painting for one of his inspired poems.  A group of old friends gathered late this Summer to celebrate his life at a bar he frequented near Times Square, NYC. At this gathering, I had the pleasure of meeting a mutual friend and talented writer, Robert E. Murphy whose written for The New York Times & Huffington Post, He also wrote After Many A Summer  (The Departure of the Giants and Dodgers from the city and a Golden Age of New York Baseball). Robert also wrote this poignant piece about our dear old friend, Joe.

I want to say something about Joe DeStefano, one of my longest-standing friends, who died last week in Las Vegas. I think most of us survivors of Class 101(at Bishop Ford High School, Brooklyn, NY) will remember our first impressions of him. He got our attention by knowing such things as that the fertile land between the Tigris and Euphrates Rivers was the “Cradle of Civilization,” so we voted him class president. I don’t think he would ever have declared himself a candidate. He was too independent for that, not the sort to seek a significant role in high-school society or even to line up the high grades he was well capable of earning. He sought learning in his own  fashion, read plenty, enjoyed literature. He was an aspiring writer who never joined the school newspaper.


Boy and man, Joe was a low-key personality. Although he could be a fierce observer of people and events, I don’t believe I ever heard him raise his voice. But he was hardly dull, and by senior year, as, I suppose, his boredom with school life was speaking, he revealed a bit of a wild streak. He, along with other classmates, enlisted in a student-volunteer program at Methodist Hospital in Park Slope, and – Joe at least – soon became less interested in studying textbooks than in perusing student nurses and the beer menu at the Coach Inn on 7th Avenue. Joe was 17 and big, and a lot of his companions, including the females, were older than he, so none of the barmen questioned his age qualification. Indeed, though I was a year younger, I lost my barroom virginity at the Coach under Joe’s shadow. We were there together, with John, too, I think, and maybe Al, on graduation night in our white tuxedos. Big. Tall, that is, and heavy. And blond. He looked not Italian at all, but Nordic.Nor did he sound like a guy who had grown up in Bay Ridge and Bensonhurst. He drank like a Northern European and loved Irish music and literature. Regarding these incongruities there is a tale that I think may now be told – in just a minute. He and I and an old friend of his who also became a close friend of mine hung together a lot during college days and after, often in the Coach. For several years we would meet there every December 23rd heard from him at Christmas.

He moved, I’m not sure why, to Chicago in the ‘70's, married and divorced, and eventually returned to Brooklyn to look after his aging mother. This surely was a sacrifice, because he had established himself as a marketing copywriter out west and had to take on some odd jobs back here. In those years I began to appreciate Joe’s character more than ever. I liked, even envied, his calmness, and I gained a new sense of his moral integrity. I don’t think he ever went back to the Church, but I noticed that he had developed spiritually. Oh, no, he didn’t proselytize, but he quietly rejected modern secularists who dismissed the reality of religious experience. His mother died, and Joe, her only child, was left to manage her postmortem. And among her papers he learned definitively what he probably long suspected – that he had been adopted. I feel that it’s alright to mention this here because Joe was open about it, and he leaves no immediate family. It would seem a shocking truth for a man to discover this in his 50's, but Joe, serene as ever, appeared unfazed. He told me that his natural father had been a college teacher. That made sense. He spent his last years in Las Vegas, working again at his writing trade. He would send me e-mail messages when certain memories or perceptions touched him, and in lieu . Joe was always nostalgic about that, and I often of Christmas cards, he began to compose online New Year’s messages. A few years ago he offered these words to me: What I guess I'm trying to get at is something like: be safe, be comfortable, love and be loved. In short, be happy. Be happy January first and December thirty first and every day in between. Enjoy it all every day and don't take anything for granted.

It takes much character and maybe even courage for a man to write like that to an old friend. And his having done so is one of the reasons I wanted to share some memories and thoughts of Joe DeStefano with his classmates & friends of exactly 47 years ago.

After Many A Summer, Robert E. Murphy
http://www.barnesandnoble.com/w/after-many-a-summer-robert-e-murphy/1112221052
Posted by Amherst Biennial at 7:11 PM No comments: